Winner of Australia’s best margarita and bronze medalist for the best cocktail creation in the world Brent Tozer has taken on the role of Group Beverage Manager at Zenith Hotels and is instrumental in bringing us the flavours of Newcastle’s best new cocktail bar.

Brent Tozer first discovered an interest in mixing fantastic flavours while working as a glassie at a Sydney pub when he was 25. After watching from a distance for a couple of years, he got his big break with an American company called Red Onion Group, who hired him as a mixologist.

He’s come a long way since the early days, and now calls Newcastle home, after travelling Australia and the world, and scooping up a collection of international cocktail awards along the way.

Newcastle’s best new cocktail bar, Swill Bar at The Exchange, features a custom list of his amazing cocktail creations. Brent spent weeks trialing and perfecting each individual cocktail, so they’re all worth a try! Brent sat down with us to share some of the highlights of his career and tell us why Swill Bar is the sip of fresh flavour Newcastle’s been craving.

You’ve got quite a collection of international cocktail awards to your name, tell us about them.

Then I won the national award for the Marie Brizard Competition, which was run by a french liquor company. The winners then went over to Bordeaux in France and competed against all the winners from the different countries across the world, and I placed 5th in the world there.

I was also lucky enough to claim Best Cocktail Australia at the Suntory competition, Best Pear Cocktail from Pear Australia and come second in the National Flair Bartending Awards.

Those competitions were a great opportunity to get out there and push myself doing what I am passionate about, but now I’m all about passing that passion along to the next generation. 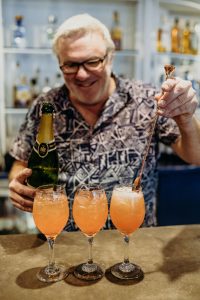 You’ve been in the mixology game a long time, tell us about your career.

Yes I was lucky enough to get picked up by Red Onion Group when I was 28, because they had a big focus on cocktails which was just the sort of job I wanted, and that was when I really had a chance to start working on creating new flavours.

I worked at their branch in Sydney for a number of years, then transferred across to work in their bars in Southern California. As an American company they were pretty serious about their drink making, so it was the perfect job to start with.

I’d have to say the best part of the role is definitely training, I’m very passionate about working with new bartenders who are just starting out, and bringing them up through the ranks, it gives me such a buzz. 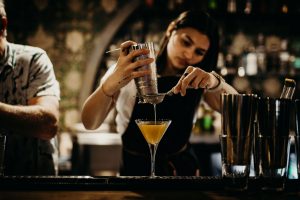 What is your favourite aspect of the job?

I get a kick out of helping new bartenders increase their skills and get to a really good level where they are confident and very competent. And all nuances of drink making. People who work in the industry are usually pretty cool too.

At Zenith we are working on some really great training opportunities. Last year we held the first annual Exchange Cocktail Championship, and that was something that worked really well. It engaged the bartenders and added a new element to the job. We had about 10 bartenders take part overall, and in the end we got some really nice drinks out of it.

The girl who actually won the competition was someone who had started with us quite early on in her career, and she now is incredibly talented when it comes to creating new flavours.

It’s really the best part of the role, being able to pass along that passion and nurture talent so it was great to see that development and see her getting some recognition for her hard work. 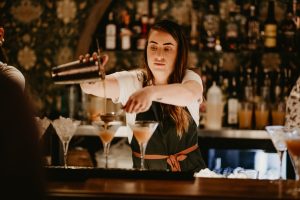 When I am creating a new cocktail list I usually start by working out the client base and what they want. What flavours they like and don’t like, whether it’s sweet, sour or savoury.

Once I narrow that focus a little bit I do some research. I’ve got great connections all across the world that I’ve made throughout my career, so I like to touch base with them and see what new flavour combinations and ideas are out there. I also have a few online resources I use to keep up to date with the latest drinks trends as well.

So I gather all these details and then look at the past 15 odd years of cocktails I’ve done and pull out ideas I think will work. I often pull out a little bit from this one, a bit from that one and put them together.

I’m pretty good at knowing what something is going to taste like before I make it these days, it’s like I can taste it in my mind.

So then if it’s a list of 8 I’ll design about 12-15 different drinks then whittle it down from there. I like using local and seasonal produce wherever possible as well.

This is the process I’ve used recently putting together the drinks lists for Shoal Bay Country Club and The Beach Hotel, both of those are very beachy venues so it was quite a different experience designing the list for Swill Bar. 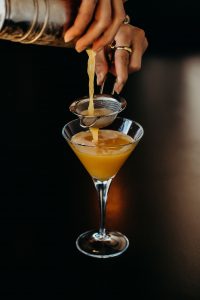 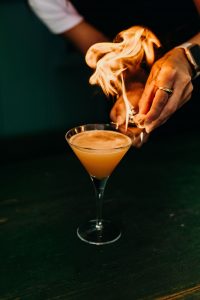 You’ve spent the past few months perfecting the drinks list for Swill Bar, tell us a bit about it?

For Swill Bar, this process has included creating some smoked fruit cocktails and some poached fruit flavours as well. I’ll be focusing on putting a few twists on some of the classics, as well as bringing in some brand new flavours Newcastle hasn’t seen before.

I like to mix a lot of my own flavours and infuse my own spirits in-house, so I’ve drawn on those skills a lot throughout the process of designing the Swill menu.

The best one I’ve come up with was a Bombay Sapphire Gin infused with lemongrass. You’ve got to know your spirits, know what spirits will take on what sort of flavour profiles, and I thought Bombay Sapphire would be good for that sort of thing and it worked out really well. 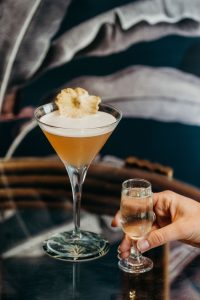 What’s the most important quality you look for in your bartenders?

Passion is the most important thing I look for when hiring, and being open to taking on new ideas.

You can always train people; experience is good but often you get people with experience and the passion has burned out, so passion first, it’s much easier to train passionate people.

My role across the group, as well as coming up with new drinks lists for each venue, includes rolling out training modules for all the venues.

These training modules cover everything from basic bartending to advanced cocktails, which is one I’m working on at the moment.

I also work with each venue to design wine lists and forge connections with other businesses, whether it’s Tooheys or a small brewer around town. It’s designing the drinks offering to fit the venue, so each one is very different.

Working for Zenith I have enough freedom to really show passion for my work, and the opportunity to pass that passion along to the next generation of bartenders is the best I’ve experienced in the industry.

If you want to join the team at Zenith Hotels and work for Newcastle’s best cocktail bar; send your resume to careers@zenithhotels.com.au

Your signup has been confirmed.

Please allow 24-48 hours to process your membership. Cards are available for collection from the bar. Photo I.D must be produced on collection.

Thank you for your enquiry. We will be in touch with you shortly.